An Engaged Community: The HPU Campus Thrives on Connection

An Engaged Community: The HPU Campus Thrives on Connection 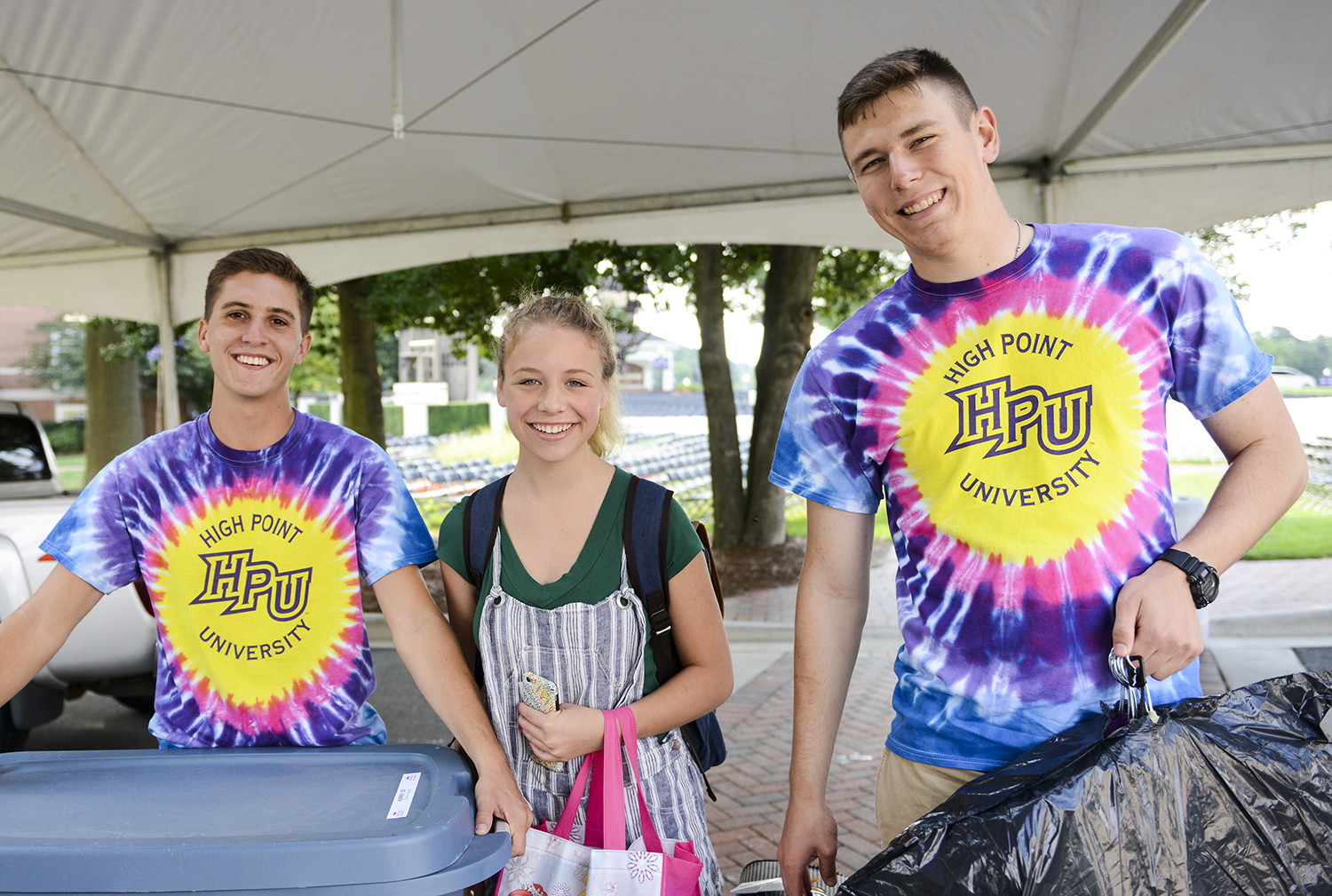 The story below is featured in the Winter 2016 edition of the HPU Magazine, headed to a mailbox near you.

Liz Reichart pulled up to her freshman residence hall with a smile on her face and a flutter in her heart.

She dreamed of becoming a High Point University student since her junior year in high school. And the moment had arrived.

But it didn’t stop the questions from entering her mind on the drive from Ohio.

Five smiling faces rushed toward her no sooner than the family car came to a stop on campus.

What they did next answered — and silenced — those questions forever.

“That moment when I drove up to my dorm and five people came to unload all of my things from my car, it was reassurance,” Reichart says. “Reassurance not only to myself, but to my family, that I was in a place where I’d excel academically and socially and in all aspects of my life.”

Those strangers, who turned into friends, celebrated the arrival of families that day as members of the Welcome Week Crew — upperclassmen, faculty and staff who volunteer to help move freshmen into their new home.

A wave of activities for Welcome Week began, and Reichart discovered their positive attitude wasn’t uncommon.

Throughout the events — a luau for new students in the R.G. Wanek Center arcade, the opening Convocation ceremony, the signing of the Honor Code, meetings with Success Coaches and more — she found it was the standard.

“Everyone was so kind and so interested in who I was as a person,” says Reichart. “I was welcomed right away.”

Her experience reflects HPU’s holistic approach to education. Academics are the focus, but faculty and staff know that for students to be successful, they must also be engaged outside of the classroom.

When students are connected to one another, they thrive.

“Research shows us that students who build strong relationships and find success in their first year are prone to be more successful throughout their four years of study,” says Dr. Dennis Carroll, provost. “Engaging students throughout the entire campus, at all times, also fosters creation and collaboration.”

A turning point for Louisville, Kentucky, native James Ensor was the Activities Fair.

It brings a sea of faces to the John and Marsha Slane Student Center, where HPU’s 100+ campus organizations set up tables of information and sign-up sheets. Students browse the aisles to find clubs and causes that interest them.

That’s what Ensor did. He signed up for the things he liked and some things he had never tried.

“It’s a good time to see what’s out there and what’s available,” says Ensor, now a junior. “I signed up for the student newspaper and the rowing club. I became interested in Greek life. I found my niche there that helped me succeed as a freshman.”

Through the rowing club, he met Reichart, and the two became friends. He recruited her to work for the student newspaper, and today they serve as editors.

They went on to be part of a group of students who founded HPU’s Alpha Kappa Psi, an academic fraternity for business-minded students.

Their network of friends continued to expand with every new organization, class project and event on campus that came their way.

And there’s always something on the horizon at HPU.

There are the fall and spring concerts, where major acts like country music star Lee Brice, hip hop artist Lupe Fiasco and music duo Timeflies have all performed.

There are sporting events by 16 Division I athletic teams to attend and dozens more intramural and club sports teams in which to participate.

There’s the Honors Scholar Program and other initiatives that offer unique opportunities for academic engagement.

In the midst of it all, students have fun. But they also begin to transform.

Josh Caudle transformed on the stage of the Hayworth Fine Arts Center. Caudle is a First Generation Scholar from the city of High Point. One of his earliest and fondest memories from freshman year is being crowned “Big Man on Campus” in front of 600 people.

He competed in the annual event, hosted by Zeta Tau Alpha sorority, to raise funds for breast cancer research. Each participant performed his own talent, dance and a number of other on-stage requirements. And Caudle won. But beyond that, he made history by becoming the first freshman to ever hold the crown.

“It might be the best moment of my life,” Caudle says through a smile. “That and choosing to come to HPU.”

Big moments kept coming for Caudle. He was awarded Freshman Male of the Year and selected to serve in the Bonner Leaders — a group of students who act as volunteer coordinators for local nonprofits. They each dedicate a minimum of 300 annual service hours.

He began to grow in all directions. The same concept symbolized in the bronze tree sculpture that stands at the entrance to campus became a theme in his life.

“To live life, you must live in balance,” Dr. Nido Qubein, HPU president, says to new students in his freshman seminar. “You must grow in all directions — mentally, spiritually, emotionally and intellectually.”

That’s what Caudle did.

Fast-forward to today. Reichart is a junior double majoring in international business and graphic design, a member of Kappa Delta sorority and a foreign language tutor. She became the point person for organizing her sorority’s Super Hero Dash, a 5k race that raised $20,000 for Family Service of the Piedmont to prevent child abuse.

Ensor is a junior double majoring in business administration and actuarial science and double minoring in statistics and finance. He is editor in chief of the Campus Chronicle and a member of Beta Theta Pi fraternity. He is also a University Ambassador who gives daily tours to prospective HPU students.

Caudle is a sophomore, continues to serve as a Bonner Leader and is also a resident assistant on campus.

Along with their peers, they will one day graduate from HPU with fond memories and lasting friendships.

Their degrees will help them start the lives they’ve worked to build.

So will their experiences — the culminating effect of being immersed in an environment that prepares students to work in a global marketplace. To thrive in collaborative environments. To build relationships and connect the dots wherever they go.

“The people here — they’re connected to each other,” says Caudle. “That’s so important in a technological world. Something about this campus makes you put your phone down without realizing it. There are people here you want to talk to. Seeing how welcoming everyone here is makes me want to be that welcoming, too.”