Occupying the site of the old Memorial Auditorium, which was demolished to make way for the new building, Phillips Hall is a 27,000-square-foot structure housing classrooms, computer labs, study rooms, boardrooms and faculty offices. It features tiered lecture rooms, a spacious auditorium and conference rooms, and is modeled after some of the finest business schools in the country.

In 1999-2000, he served as Chairman of North Carolina Citizens for Business and Industry, the State Chamber of Commerce known as “the voice of business in North Carolina,” and was Co-Chair of North Carolinians for Educational Opportunity 2000. Earl N. Phillips, Jr. was sworn in on February 28, 2002 as the United States Ambassador to the Eastern Caribbean serving the seven island nations of Barbados, Dominica, St. Lucia, St. Vincent and the Grenadines, Antigua and Barbuda, St. Kitts and Nevis, and Grenada.Other business and service related positions include: North Carolina Economic Development Board, 1984-1992; National Advisory Council, US Small Business Administration, Washington, DC, 1990-1992; Piedmont Triad (Greensboro, High Point, Winston-Salem, North Carolina) Airport Authority, 1992-1997; Director of First Union National Bank of North Carolina (now Wachovia) Board, 1988-1998. He received the Global Leadership Award from Kenan-Flagler Business School and the Distinguished Alumnus Award from UNC-Chapel Hill, 2002. He has two children and two grandchildren. 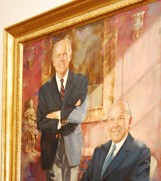 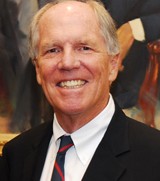 The Phillips Family has had a long tradition of supporting the School of Business at High Point University.  Before Ambassador “Phil” Phillips made the Phillips Hall possible, his father, Earl Phillips, Sr. (seated in the painting above) was the namesake and a major contributor to the Earl N. Phillips School of Business.  Earl Phillips (b1897 d1975), was an entrepreneur who saw the potential of the home furnishings industry and, over a 50-year career, founded companies offering upholstery fabric, polyurethane foam, springs, financing, and showroom facilities. After college at Washington and Lee University and William and Mary College, Phillips joined DuPont as a sales representative for the state of Virginia. In 1932, he moved to High Point, and with his uncle W. Stanley Davis, founded Phillips Davis, Inc. This fabric converting and sales company grew to become Phillips Mills which included a fabric weaving mill in Monroe, North Carolina, and a velvet mill in Jamestown, North Carolina.

Phillips co-founded Phillips Foscue Corporation in 1957, Factors, Inc., a financial services provider, was started in 1958, and First Factors in 1972. Seeing the need for showroom and hotel space for the growing Southern Furniture Market, he, with others, was instrumental in the development of the Furniture Plaza Showroom Building and the adjacent Holiday Inn. Phillips also enjoyed business endeavors “related to the industry” and was founding chairman of the world-renowned Hatteras Yacht Company and the String & Splinter Club, a High Point community institution. He served as Mayor of High Point from 1945 to 1949 and endowed the Phillips School of Business at High Point University in 1965.