Transcripts – Submit your official transcripts to the Office of Undergraduate Admissions at HPU. We require certified English translations and curriculum evaluations of each transcript.

We recommend using one of the following companies for translation and Course-by-Course Evaluation:

Test Scores – High Point University does not require these scores, but they could meet your English Proficiency requirements or help you qualify for academic scholarships. If you have completed the SAT or ACT, you are encouraged to submit the official scores with your application with the links below.

English Proficiency –  Students of non English speaking countries are required to submit one of the following accepted English proficiency exams. Below are the accepted tests and the minimum test score requirements:

These are the minimum scores, but do not guarantee acceptance.

Exceptions – Students of non English speaking countries who have completed school in the USA for 2 years or more do not have to submit an English language proficiency test. 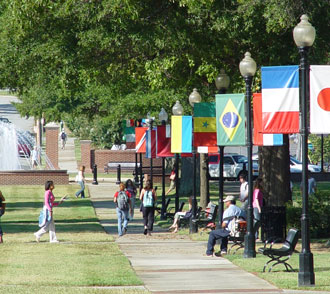 The Admissions Committee (AC) will examine for the following:

These are the minimum scores acceptable and do not guarantee acceptance. If you do not meet our minimum acceptable scores, you may also demonstrate English language proficiency by completion of the highest proficiency levels at INTERLINK. Students should first apply to High Point University and if all other aspects of the application are acceptable will be granted Conditional Admission to INTERLINK.

Upon admission to High Point University, all non-native English speakers are required to take an ESL (English as a Second Language) placement exam.  The results of this exam will determine whether the student will be required to take 0-16 hours of credit-bearing ESL classes during the first two semesters at High Point University.  Any required ESL classes will fulfill the Foreign Language portion of the General Education (Core) Requirements.

You Are Meant to be Extraordinary
Students embark on a one-of-a-kind journey when they enroll at HPU. Through experiential learning, students begin to develop their portfolios and relationships with professors who embody a growth mindset. At HPU, you can expect to develop life skills, foster your values, build character, gain practical experience and expand your knowledge through academic excellence.
Contact the Office of Admissions
One University Parkway High Point, NC 27268
Campus Map
(800) 345-6993
(336) 841-9216
(336) 888-6382
admiss@highpoint.edu
Daily from 8:30am — 5:00pm.